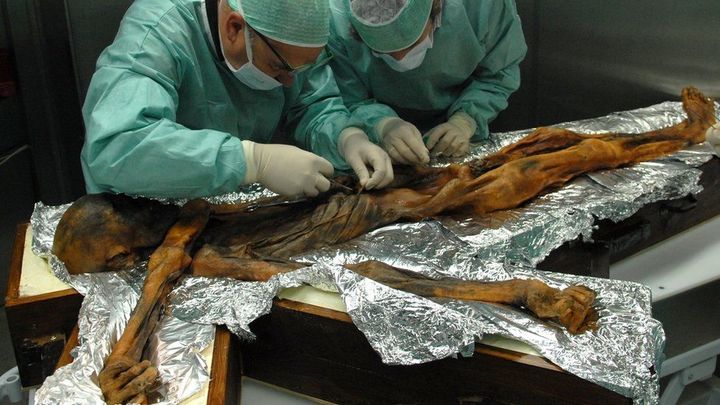 On 9th September 1991 on 3300m above sea level in the Yotzi Apls two german alpinists found a well preserved corpse of a male, near the Austrian -Italian border. The scientists name him Tyrolean iceman from Yotzy. It is believed he lived in 3400-3100b.c.

It is amazing that he is very well preserved. Even the antropologysts can determin accurately that he sufferd from many diseases, but despite this he lived till 45, which is very rare for that time.

The reason for death was probably a wound from an arrow with a quartz blade, which was found in his left shoulder, and some other injuries as well.

In 2015 after more than two decades after the discovery, the scientists managed to scan in details his epidermis. They found something unusual. During the examination they determine that Yotzi iceman had 61 tattoos on different body parts. They depicted paralel lines and dots, grouped by two, three and some areas by seven together. The more astonishing is they were placed exactly above certain acupuncture spots - on joints, the lower back, on the rib cage. This  led the scientists to conclude that Iceman had some healing knowledge.

The acupuncture is a traditional form of healing in China. Needles are pierced on neuro-hormonal meridians to relieve pain and for healing some diseases.

Now, the intriguing thing however is that Acupuncture was born in China around 100 b.c. This means the Acupuncture didn't exist as a form of healing in China at the time Yotzi Iceman lived.

Naturally this raises the quistion HOW ?

Acupuncture comes from China but in this case we have something in the Alps, furthermore way much older. The fact we have tattoos on certain meridian points on the body, leads to the idea that this ancient civilization knew the meridian points and how energy flows in the body.

Interesting is that many of the most popular tattoos in the past and even today, reseble cosmic and astral symbols. The most common tattoos nowadays we see stars, planets, constellations, sun, astrologycal signs and even the moon phases.